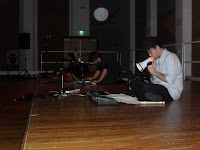 Here are some photos from Saturday night's launch.
ABC Classic FM's broadcast of the event, along with interviews with Ron Nagorcka and Shame File Music's Clinton Green, is streaming for the next few weeks here.
Posted by Clinton at 3:48 AM No comments:

This month The Wire magazine features an online web exclusive of a track from Artefacts Vol. 2: Kurt Volentine's "Vortex Street". Kurt Volentine was one of the numerous projects from Sydney's Ian Andrews from the early 1980s, that also included Cut With The Kitchen Knife and The Horse He's Sick.
Posted by Clinton at 2:28 PM No comments:

Shame File Music's Clinton Green and Golden Fur's Sam Dunscombe were interviewed last Sunday night by Greg Wadley on 3CR's Two To The Valley programme. Those who missed it can now podcast the programme.

The whole 90 minute programme was dedicated to discussing the new double CD and playing tracks off it, and Sam also gave some insight into what Golden Fur have planned for their performance of Ron Nagorcka's Atom Bomb, due to be performed for the first time in thirty years at the Artefacts Vol. 2 launch this Saturday night.
Posted by Clinton at 2:07 AM No comments:

Reviews of Artefacts Vol. 2 are starting to appear. Where they are online, I will add links here.

RealTime issue 99 (Oct-Nov 2010) - ...a conduit into a not-so-distant past...the pieces and artists that Green has selected, along with his copious liner notes, are an attempt to rectify this situation; not only for students of the era, but for anyone interested in experimental arts practices in this country and in music in general.

Mess and Noise - Artefacts Of Australian Experimental Music: Volume II truly showcases the breadth of musical practice in Australia during a little-examined period of time. It is an eye-and-ear-opener for anyone willing to listen. It is not impenetrable or difficult for those unfamiliar with the genre.

Aiding and Abetting #323 - This is easily one of the most important releases of the year.

Cyclic Defrost - Artefacts II comes across like the belligerent older brother of the NMA tapes series (rereleased by Shame File in 2006) and Chapter Music’s Can’t Stop It! compilations, albeit an older brother who is listening to Cage and The Cramps whilst reading Camus.
Posted by Clinton at 11:04 PM No comments:

For those who can't make it to the launch, or want to relive the concert, it is being recorded by ABC Classic FM. Part of it will be broadcast later that evening on New Music Up Late from 10:30pm, and the rest at a later date. Tune in on the night or listen online via the website.
Posted by Clinton at 7:15 PM No comments:

Sunday 21 November from 11pm on 3CR's "Two To The Valley" will be a special programme on Artefacts Volume 2, featuring series curator Clinton Green, and Golden Fur's Sam Dunscombe talking about the upcoming launch. Tune in at 855mhz on the AM dial in Melbourne, or streaming via the 3CR website.
Posted by Clinton at 6:56 PM 1 comment:

Jon Rose and the evolution of the violin

Jon Rose has been a mainstay of experimental and improvised music in Australia since the 1970s. Artefacts Volume 2 includes two tracks that feature Rose in different improvising ensembles featuring the likes of Rik Rue and Tony Hobbs.

Rose has been prolific in his work as an improvisor, composer and explorer or new instruments, whether they be bicycle powered orchestras or the use of Australian outback fences as string instruments that are often thousands of kilometres in length. One constant point of interest throughout Rose's career has been the exploration of the violin as a new kind of instrument.


Since 1987, Rose's Palimpolin Project has been steadily developing around the concept of an interactive violin bow that incorporates electronics into violin performance. Rose will perform with the latest incarnation of the interactive bow at the Artefacts Volume 2 launch concert.
Posted by Clinton at 7:21 PM No comments:

Don Campau's excellent website The Living Archive of Underground Music recently published a historical overview of cassettes in Australian underground music, written by Artefacts compiler, Clinton Green. Amongst other things, the article discusses Ron Nagorcka's tape recorder opera "Atom Bomb" as a key event in the development of tape music (where tape recorders are the primary generators of aural and/or compositional materials) not only in Australia but internationally as well. "Atom Bomb" is essentially a dialogue between performers and several domestic tape recorders, where sonic materials (vocals and keyboards) are generated during the performance, sampled, played back and resampled by the tape recorders. In composing "Atom Bomb", Nagorcka recalled a statement from Jean Charles Francois earlier in the decade to the effect that ‘all electronic music is a distortion of music’s reality’; "Atom Bomb" is essentially an exploration of this concept with cassette tapes.

First performed at the Clifton Hill Community Music Centre in 1977 by Nagorcka and Warren Burt, "Atom Bomb" will be performed for the first time in thirty years by contemporary New Music trio, Golden Fur, at the launch for Artefacts volume 2, on 27 November 2010 at the Iwaki Auditorium in Melbourne. Don't miss this one-off re-imagining of a key work from the Australian experimental music canon.
Posted by Clinton at 4:44 PM No comments: